There's a Chinese folk tale, variously called "Fortunately, Unfortunately," or "That's Good! That's Bad!" A farmer loses his horse - bad fortune! But soon the horse returns, with a stallion - good fortune! The farmer's son is thrown off the stallion and breaks his leg - bad fortune! But then military officers arrive in the village to conscript every able-bodied man and the farmer's son isn't taken because of his leg... And so on.

My five-day solo trip in China felt like a version of this tale. The first piece of seemingly bad fortune was the discovery upon arrival in Beijing that the reservation confirmation receipt for my Chinese hutong inn (a hutong is an alleyway or narrow side street) didn't have enough information on it for the average Chinese person to be able to tell where it was located. The good fortune was finding one person after another, most of whom didn't speak any English - and I speak no Chinese - to help piece together the next step of my journey, from airport to express train to subway to street. My final angel of mercy was Peng, who did speak some English and told me to call him Elton. He helped me with my heavy luggage, guiding me down the correct street to the front door of the inn, a welcome sight. 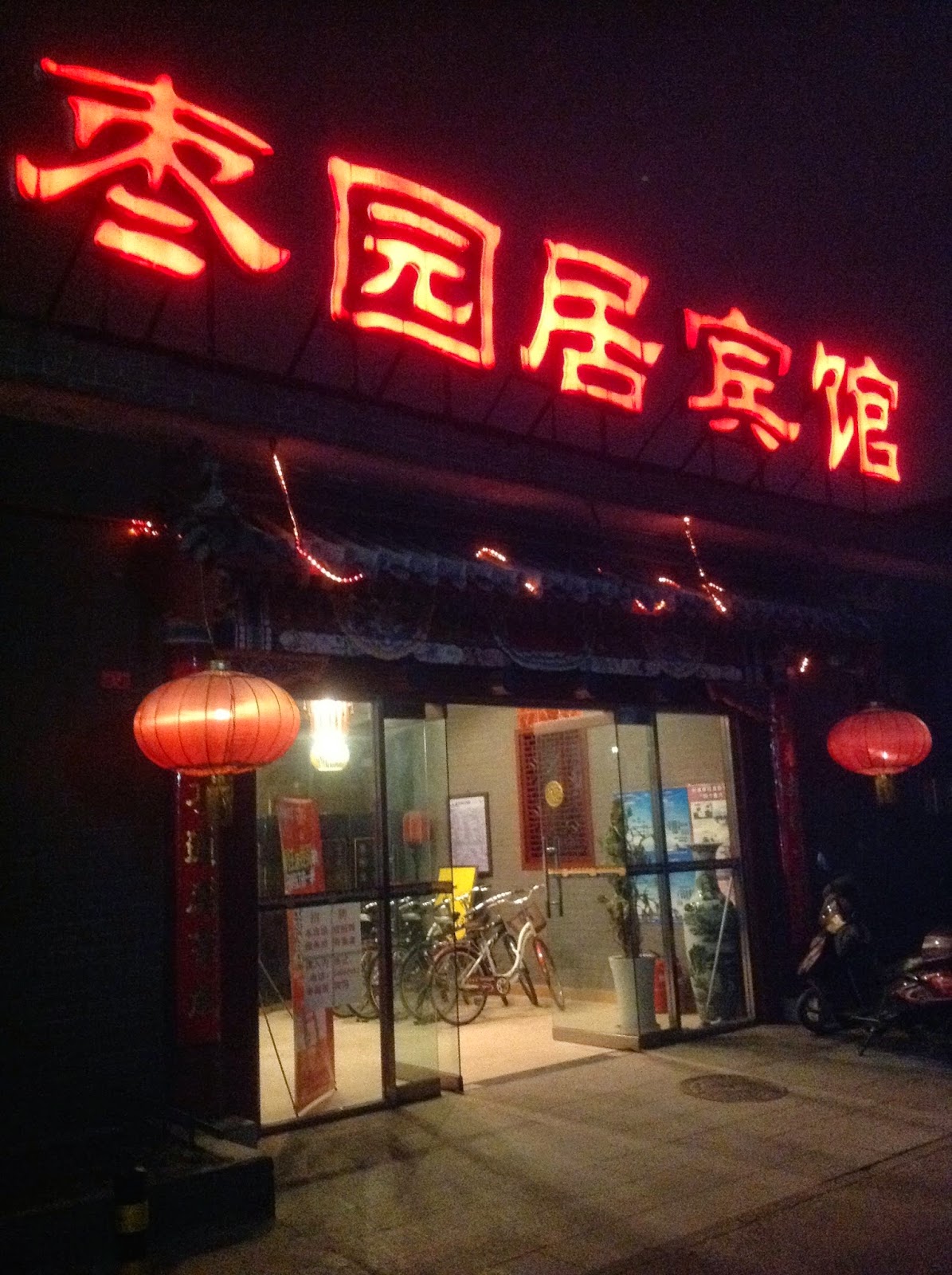 We exchanged enough information, with the help of my iPad photos, to discover that the city my grandfather grew up in in the early 1900s is Elton's hometown! To have bumped into each other in one of the largest cities in the world seemed quite remarkable. 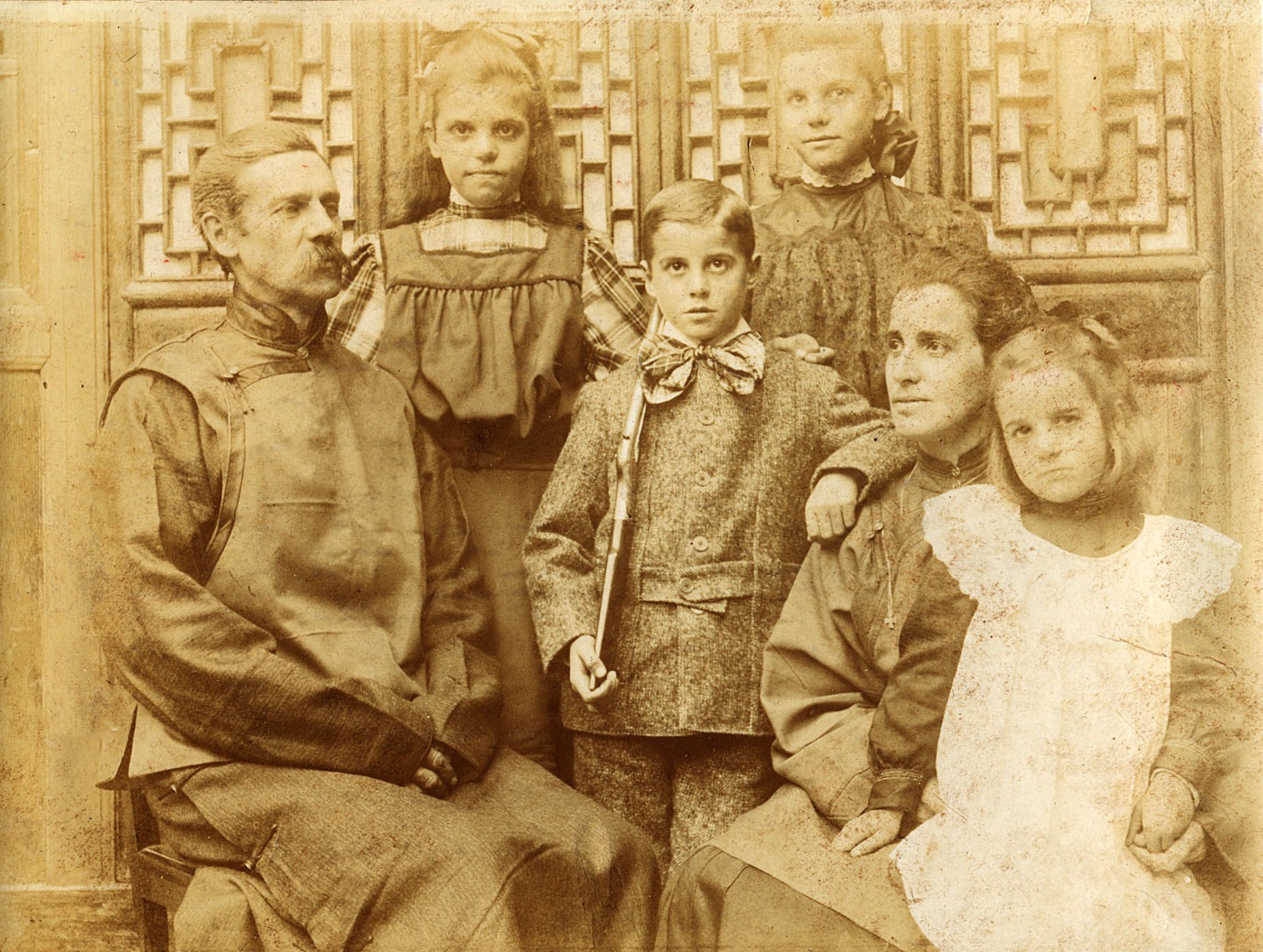 My grandfather, Horace Norman Sibley, center, with his parents and sisters, approx 1906.

The next day was a trip to the Great Wall, which I've wanted to see ever since I painted it for the book Talking Walls by Margy Burns Knight. I'd chosen a tour to the Mutianyu section of the Wall, supposed to be one of the most scenic. I spent the day with an international group of tourists from Pakistan, Canada and the Philippines, our driver, and our guide, a young woman called Eva. Eva is married, with a 2-year-old son, and commutes two hours each way from her suburban apartment, because housing closer to the city center is unaffordable. The tour included some Ming tombs, a jade factory, lunch in a restaurant at the foot of the mountain (about an hour northeast of Beijing), and finally, the Wall! 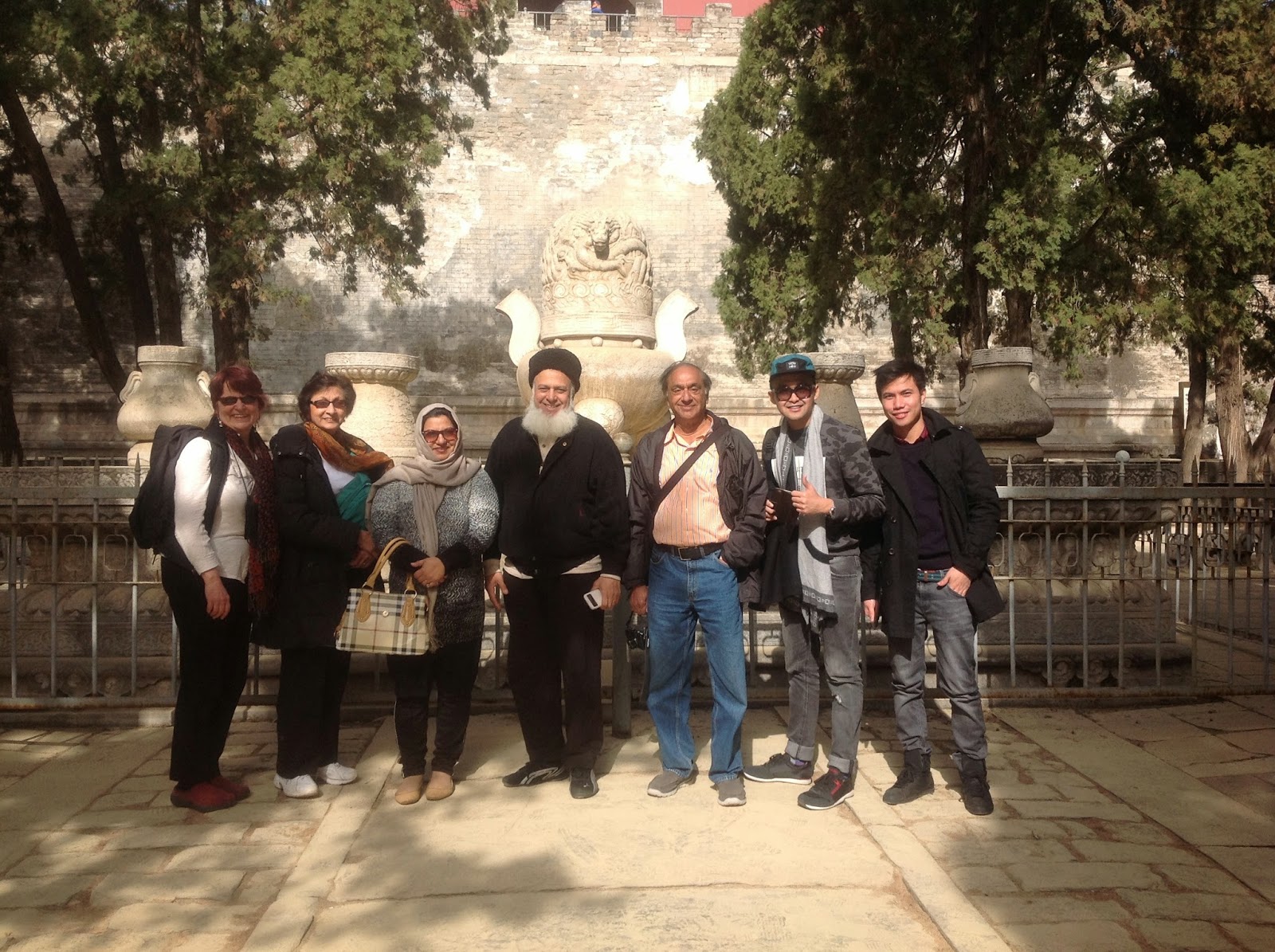 Our tour group at the Ming Tombs.

No photos can do justice to the scale and sheer magnificence of the Great Wall. Seeing the height and steepness of these rocky mountains, it stuns the mind to think of the engineering feat that created this Wonder of the World - and of the millions of lives lost in its construction. The Wall is so high up that almost everyone opts for the cable car or chairlift up - with the option of a tobbagan ride down! It's a real physical workout, just ascending and descending the stairs and walkways on top of the Wall itself. 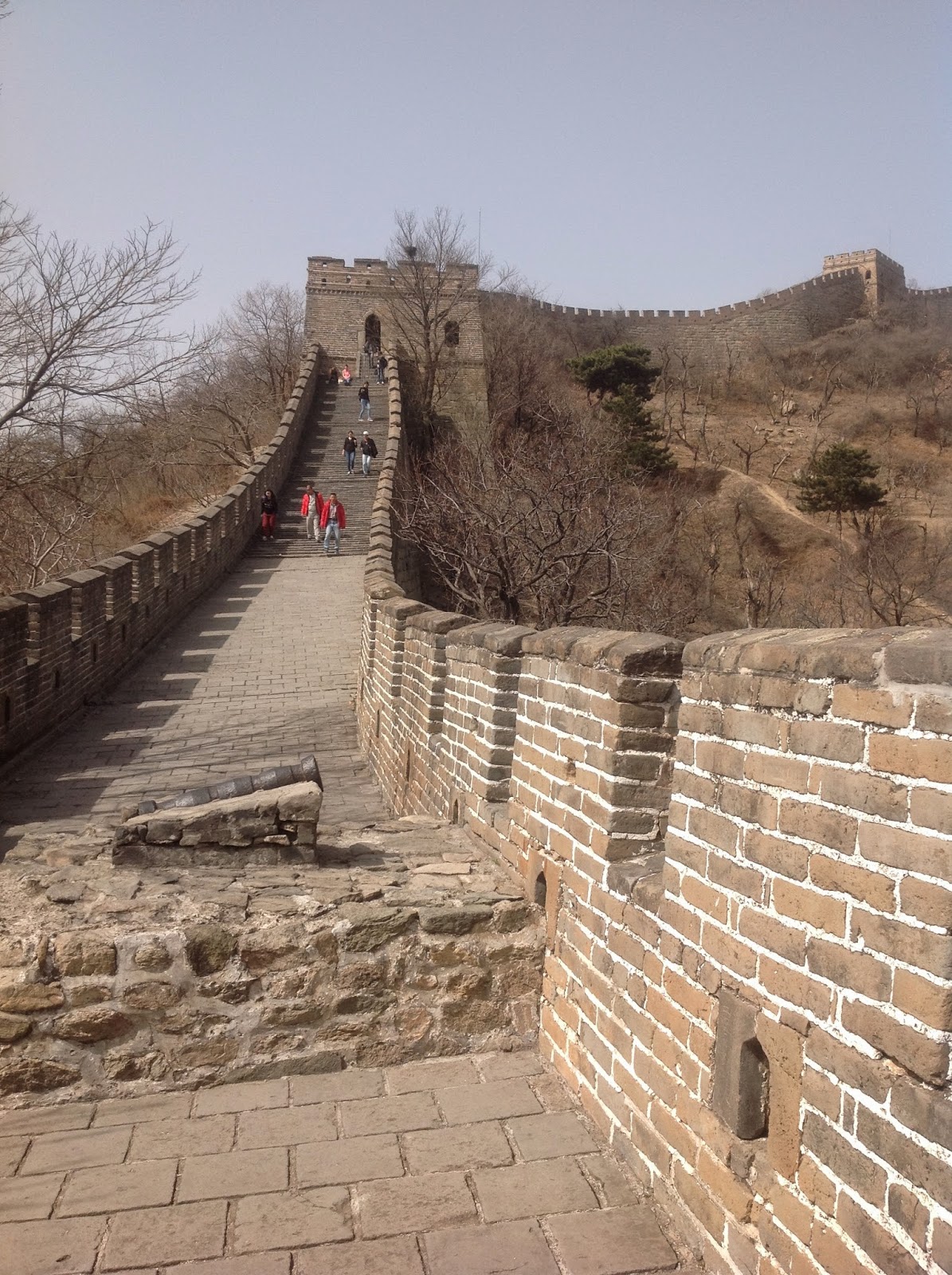 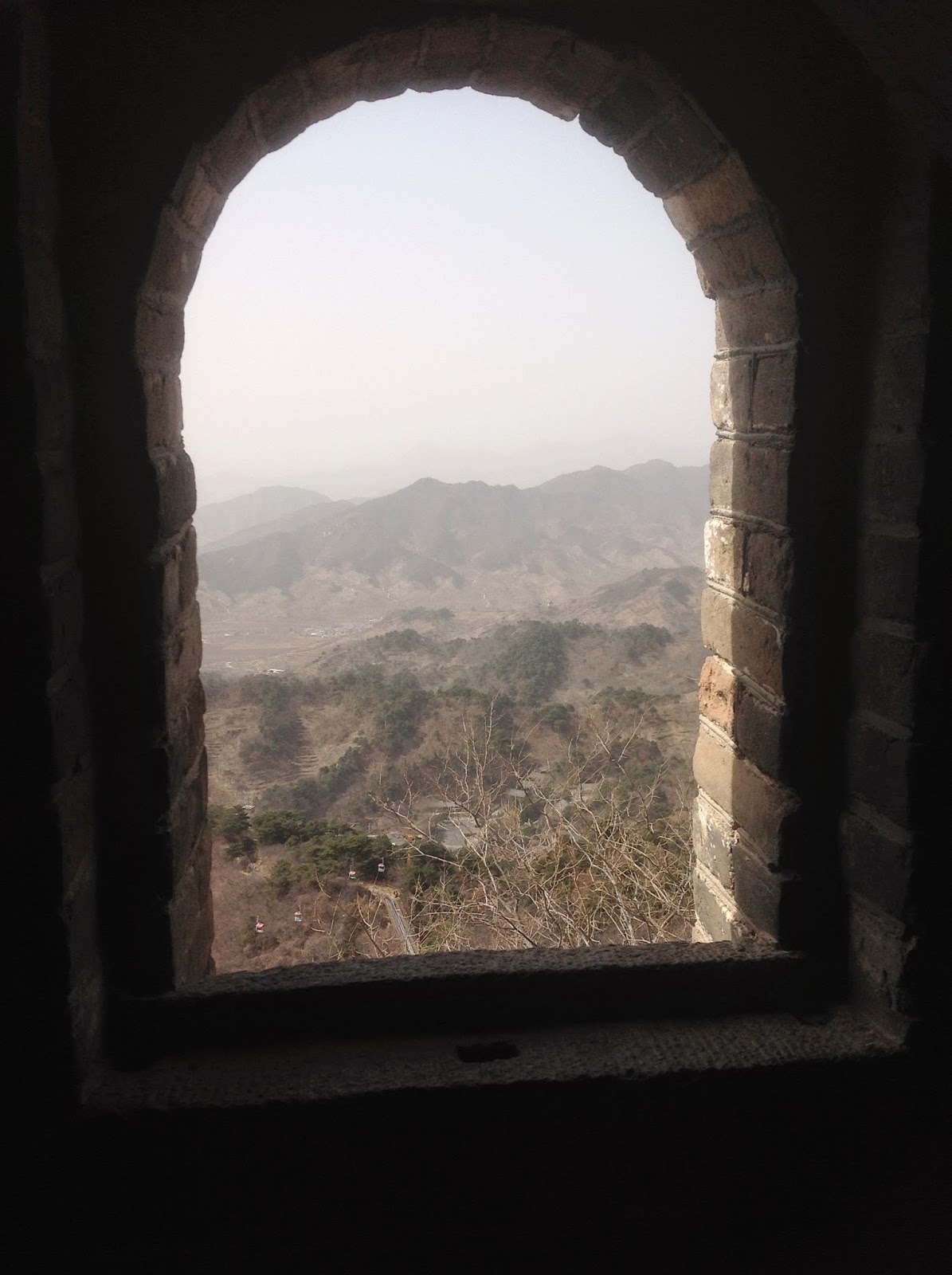 Saturday I flew to Dandong, on the northern banks of the Yalu River, which forms the border between China and North Korea. In addition to growing up in South Korea, for the last eight years I've been working on a young adult novel set in North Korea. (The day I was leaving on this trip, I received some very exciting news about this novel - TBA in a future post!) I wanted to travel to this part of China to trace the steps of my fictional characters, who in the book's climax end up on a section of the Great Wall, called Hu Shan (Tiger Mountain), not far from Dandong.

I was tremendously excited to discover upon arrival that my 6th floor hotel room looked out over the Sino-Korean Friendship Bridge and the North Korean city of Sinuiju, barely visible in the smoggy mist: 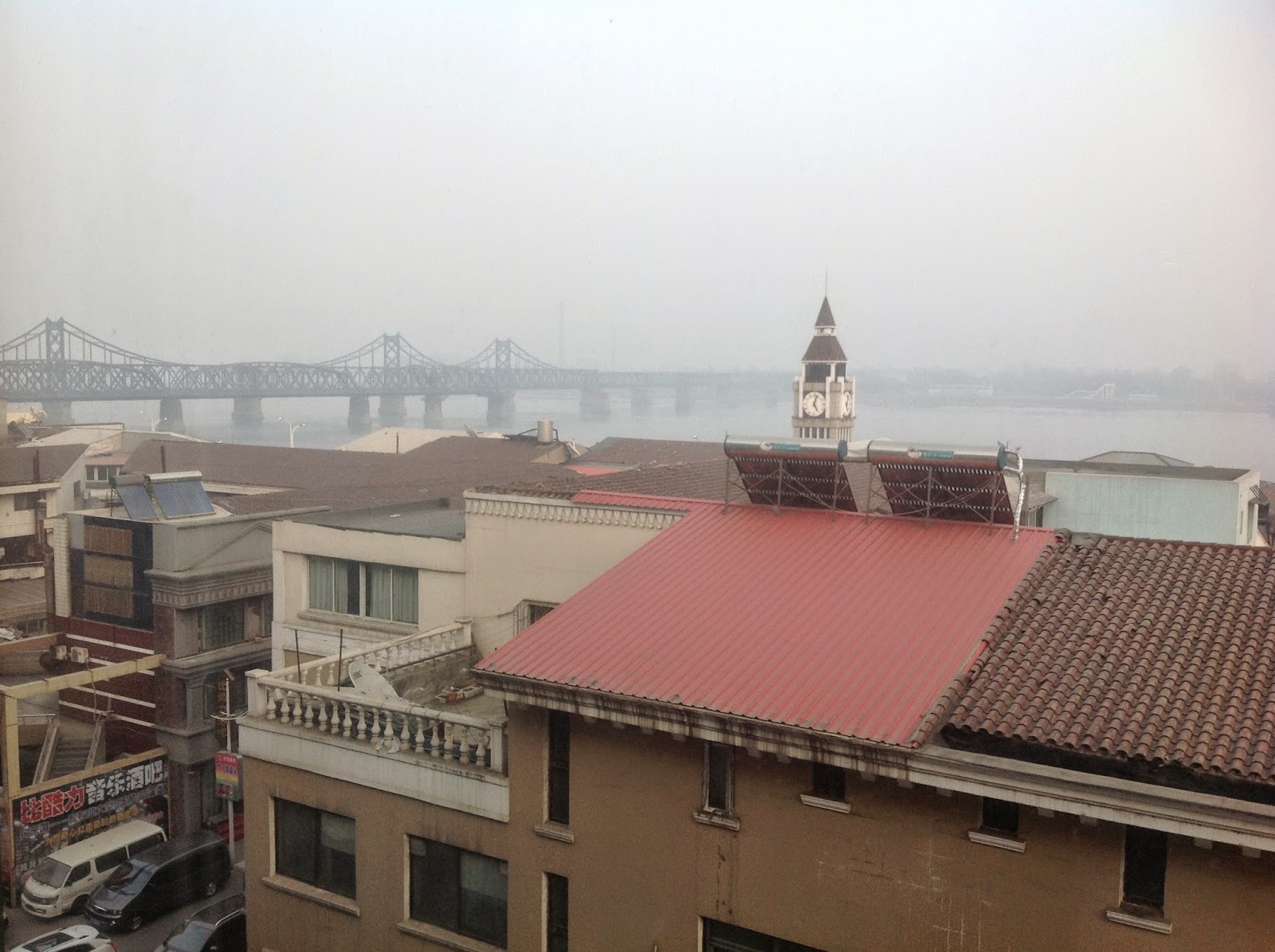 At night, Dandong is aglow in neon, while across the river Sinuiju shows only a few pinpricks of light. 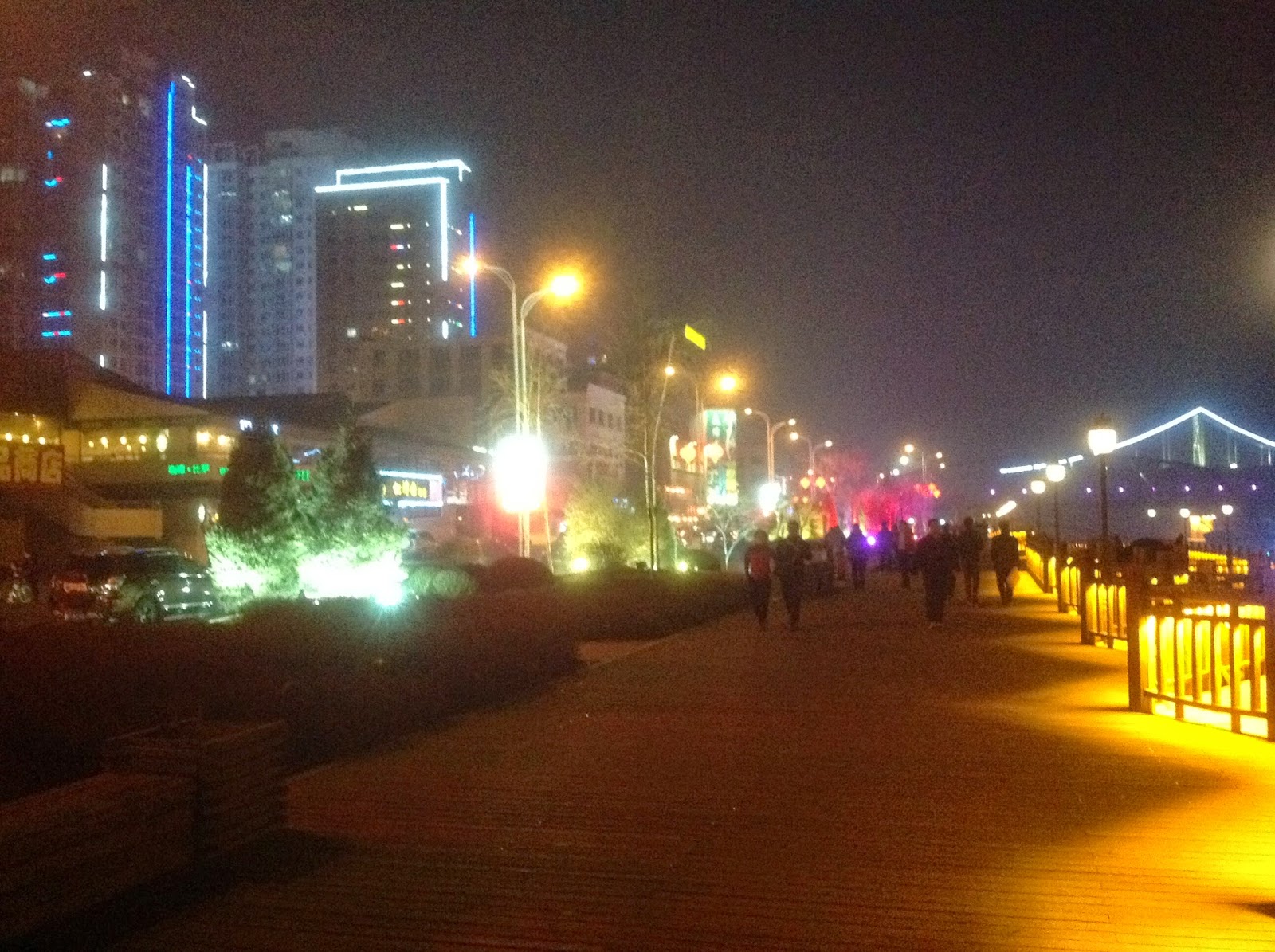 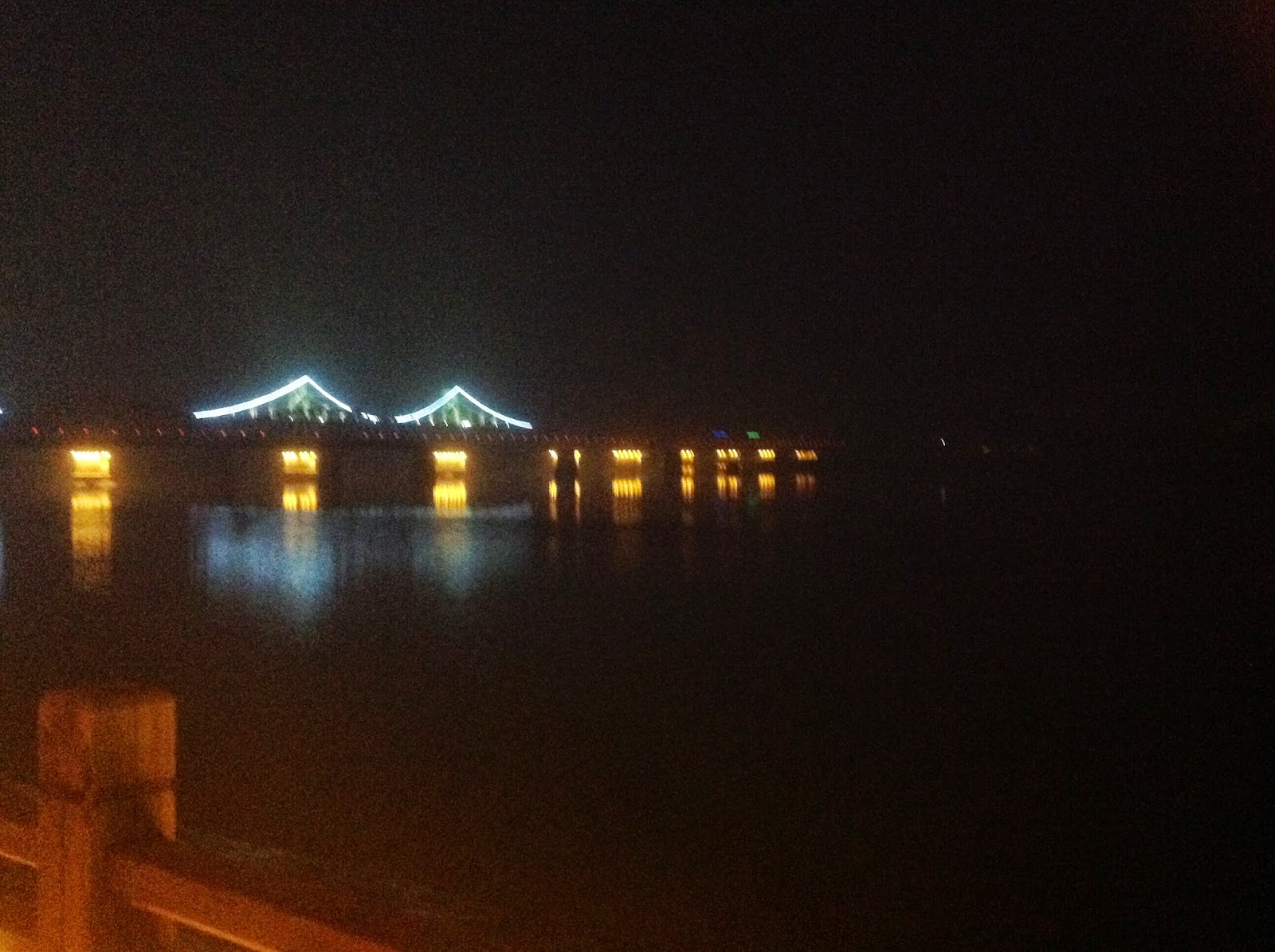 Dandong is where I really entered the Chinese tale mentioned above: On my first day, I explored transportation options to Hu Shan, successfully locating the train station, the local bus station across from it, and the exact bus that would take me to the Wall, using a combination of Pictionary and Charades. Unfortunately, when I got there the next morning, I found that the next bus didn't leave for 2 hours. Fortunately, there were two Chinese men who were also going that direction, so the bus station official hailed us a taxi. Unfortunately, when we got to Hu Shan, we discovered that the Great Wall was closed for the day! Though I indicated I'd like to get out anyway to walk around, the taxi driver just sped by, giving me reassuring gestures. Fortunately, it turned out that the two other passengers were looking for an up-close view of the DPRK, and we ended up on a speedboat, cruising down the river into North Korean waters!

A North Korean village on an island in the Yalu River. We are traveling between the island and mainland DPRK - clearly in North Korean waters. The woman herding goats waved and smiled when I called hello to her in Korean.

When I did finally get out of the taxi on the way back to Hu Shan, the entrance to the Wall was indeed closed; inside, a grounds crew was gathering and burning brush. Exploring around the edges on my own - including scrambling up one steep slope, hanging onto branches to keep from slipping in the sandy soil - I stumbled upon paths and views that I never would have found if I'd been on top of the Wall.

And on the south side, there is no gate! 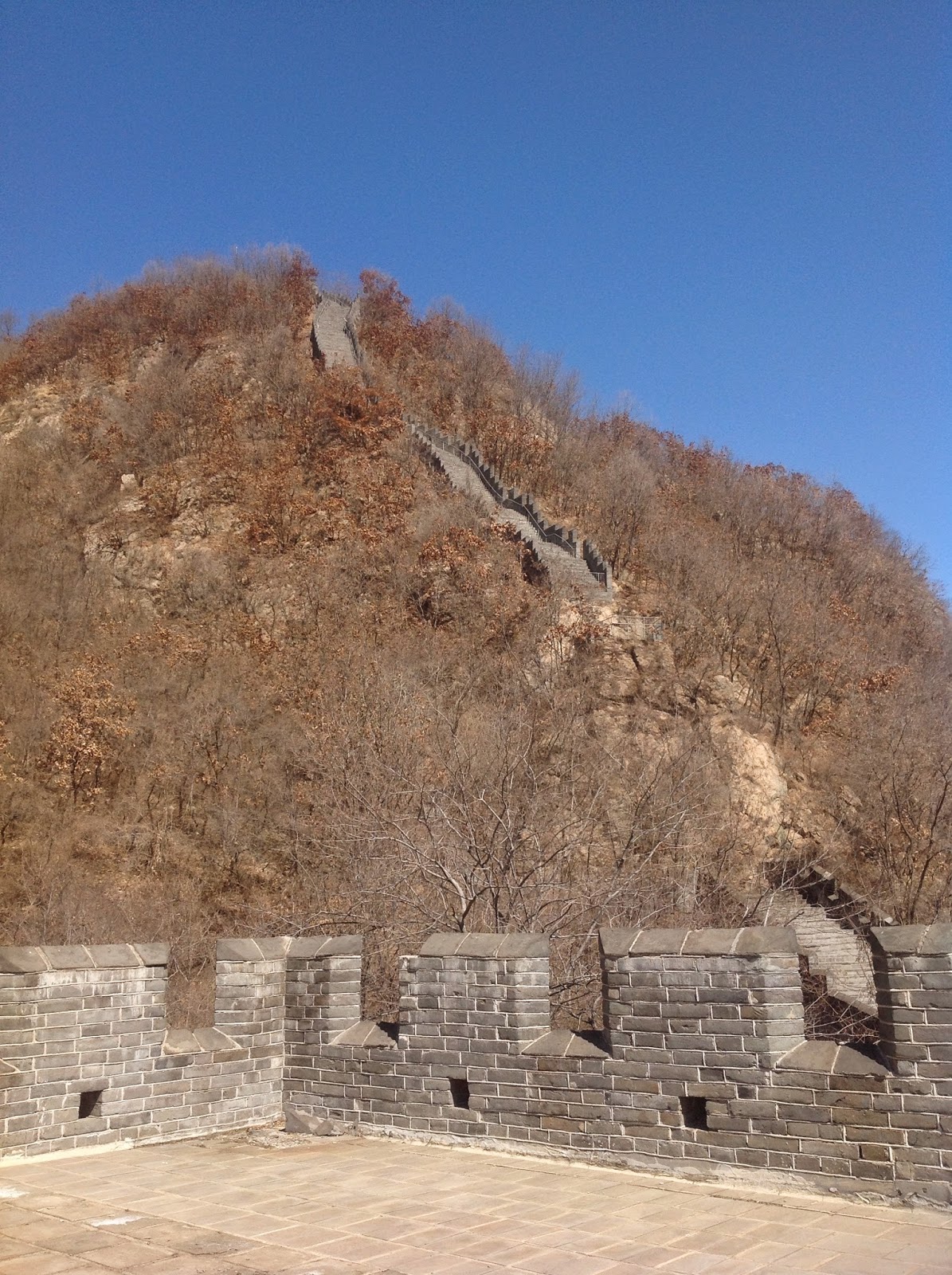 I was able to climb part way up the Wall, just as I'd imagined, and sit to paint a panoramic view of the North Korean countryside.

All in all, an amazing adventure, full of good fortune!

Posted by Anne Sibley O'Brien at 1:39 AM

Anne! This is BEAUTIFUL! I love this post and it struck so many chords that resonate with me, from the history, the adventure, the exotic place, the plein aire art. You rock and I adore posts like this (I hope I can figure a way to follow your blog through my networks, didn't happen to see any links). I shared to my FB wall, I hope a lot of people find your blog!

again, so beautiful, what a blessing to experience this. thank you for sharing.