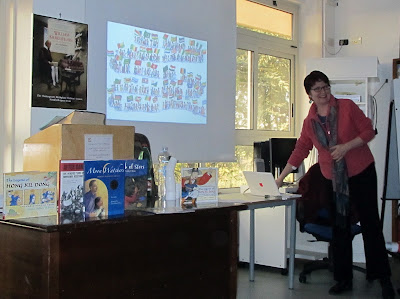 I spent last week in Italy, with two days as a visiting author-illustrator at the American Overseas School of Rome, focusing on Africa is Not a Country (K-2), The Legend of Hong Kil Dong (8th grade art classes), and After Gandhi (7th grade English). I felt a real connection with this K-12 school community, its wonderfully welcoming staff and multinational, multilingual student body. 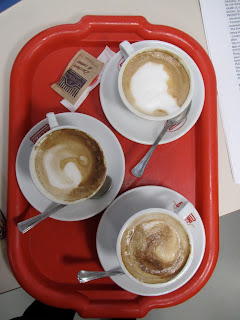 The school borders the busy Via Cassia on one side and a green zone of rolling hills on the other - amazing to find in the midst of a huge city. The cafeteria serves Italian food - risotto cooked with radicchio one day, pasta with pesto the next. Best of all, there is a coffee bar in the school, and kind staff members kept bringing me freshly brewed cappuccino between sessions! (Sets a new standard for author visits.) 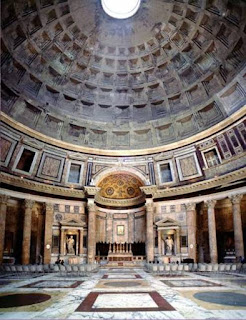 On either side of the days of presenting, I got to explore Rome, with sights like the Pantheon, the majesty of which no photograph can convey.

And I got to experience - and get stuck in while traveling back from Florence - the biggest snowfall Rome has seen in decades, some say in 55 years!

My host, upper school principal Ken Kunin, shared some of the books he's used as references for faculty training on cultural competency, including Readings for Diversity and Social Justice, in which I found this gem of a passage in a Patricia J. Williams essay on intentional color blindness, "The Emperor's New Clothes" (here's an excerpt):


"... I do think that to a very great extent we dream our worlds into being. For better or worse, our customs and laws, our culture and society are sustained by the myths we embrace, the stories we recirculate to explain what we behold. I believe that racism's hardy persistence and immense adaptability are sustained by a habit of human imagination, deflective rhetoric, and hidden license. I believe no less that an optimistic course might be charted if only we could imagine it.

What a world it would be if we could all wake up and see all of ourselves reflected in the world, not merely in a territorial sense but with a kind of nonexclusive entitlement that grants not so much possession as investment. A peculiarly anachronistic notion of investment, I suppose, at once both ancient and futuristic. An investment that envisions each of us in each other."

Great quote. And apparently a wonderful trip! Brava!
Glad it went so well and was so rewarding.

What an amazing quote! Thank you for sharing it. Though I follow your blog I haven't visited this site in awhile and I am glad to be reminded of all you have to offer. I wish that my vision were as clear as hers and yours.

I was thinking of you just yesterday and wanted to hop onto the blog and see what you're up to. Glad to see that you had a wonderful trip in Italy - what an opportunity! I hope you had a great time, glad to have you back here in Maine!