But Then Again, They Can Get It from Us

Just read a powerful post on Love Isn't Enough entitled "They Learned It From Watching You," originally posted at CocoaMamas.com. Author LaToya describes exclusionary play at the preschool where her daughter is the only African-American child. She shares her frustration at the school's handling of the incidents which involved responding to the children who were excluded but not addressing the larger problem of the children who were doing the excluding, and what it was they were acting out.

LaToya writes, "(L)et’s please recognize that these children learned this behavior at home... Their parents don’t have friends of other races – they don’t have to. Their kids witness their parents having mono-racial ideas of who is worth hanging out with and who is not... And they make an inference that if Mom and Dad don’t hang out with these people, then I shouldn’t either – for whatever reason." 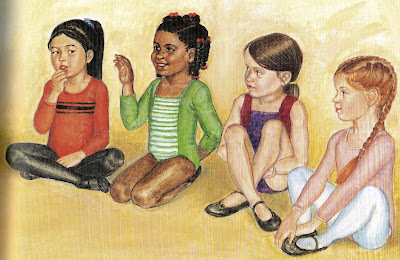 According to psychologist Krista Aronson, community and dominant cultural norms are indeed stronger than family ones in influencing children's attitudes about race. But when these norms are not only not contradicted in the family but actually upheld through the absence of cross-racial relationships in our lives and our silence about race, children do learn from us.

Absence and silence are powerful teaching tools.
Posted by Anne Sibley O'Brien at 12:30 AM