The Different One: Racial Identity Development 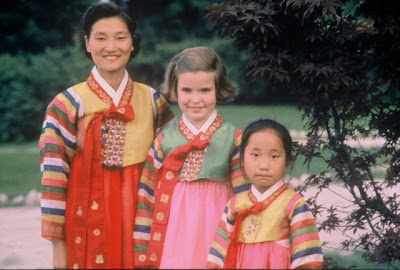 "Yoh-roh-bun-dul, ahn-nyung-ha-shim-nee-ka." I open many of my school presentations with this photo and a greeting in Korean: "Hello, everyone. This is my picture. When I was seven years old, I moved to Korea. From then I learned two languages and two cultures. This is my eighth birthday."

After I've translated the introduction, I go on to share a little about my childhood: how conspicuous I was as a tall, light-skinned, light-haired, large-nosed, round-eyed American, growing up in South Korea in the 1960s when few foreigners lived in the country. When I went to the market, a crowd of people would gather around me, marveling at how different I looked. It was kind of like being a princess, I tell the children.

This early experience provides an ideal segue for a discussion of difference. "I was treated as if I was special. What do you think I learned about being different? That it was fabulous! It was certainly working well for me. But is this how we always treat people who are different?"

I ask the students how many of them have ever been "the different one" - because of skin color, body size, learning style, language, the only boy, the only girl, and so on. Usually most children in the classroom raise their hands. "How did that feel? What happened to you?" I ask. We talk about being left out, being teased, being called names. I've had this discussion with children as young as first and second grade. 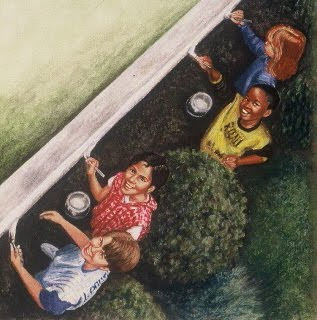 With older children, I then go on to share a simple explanation of Racial Identity Development - how each of us comes to understand race and to think about our own race:

"As we grow, each one of us gets ideas of who we are by the mirrors that are held up for us, including mirrors about race. You're having this experience right now. If you're one of many, like one of the boys on a soccer team, you don't think much about being a boy. But if you're one of a few, like the only girl on the soccer team, you think about it all the time, because everybody tells you you're a girl, you're different.

"Race is like that, too. In the United States, if you're white, you usually don't notice it because the majority of people are white. But if you're a person of color, you tend to notice it a lot more. Everyone reminds you all the time that you're the different one. So our different experiences of race give us different ideas and different ways of thinking about race.

"When I was young, the mirror of responses of other people to my difference - 'You're American! You're American!' - made me notice that I was white. Do you think that my friend Ok-soon, on my left in the photo, thought much about being Korean? No, because everyone around her had similar hair, skin color, and features. She blended in."

Any racial experience in the lives of older children can be an opportunity to introduce the concept of racial identity development, individually or with a group, with lead-in questions such as:

Racial Identity Development has much to recommend it as an introduction for young people to the topic of racism:
1. It's a non-threatening approach that doesn't automatically provoke defensiveness.
2. It sets up a level playing field by including everyone in the discussion and the groups that are being examined.
3. It offers a way to get white kids thinking about themselves racially, to counteract the silence and invisibility of race in the white community.
4. It's a natural segue into the concept of socialization, including in-groups and out-groups.

For an in-depth explanation of racial identity development, see Beverly Daniel Tatum's book, Why Are All the Black Kids Sitting Together in the Cafeteria?
Posted by Anne Sibley O'Brien at 10:09 AM