At the website, Love Isn't Enough, there's a post entitled "Race Is Not an Issue for the Young?", in response to a CNN news story discussing transracial adoption and the public reaction to Sandra Bullock's adoption of an African-American baby. The commentator at one point observes that transracial adoptees may experience confusion as children but grow up to say, "Thank goodness someone saved me!", and the white psychologist being interviewed made statements that "adoption is colorblind," "I think race should really only be examined if you’re over 40," and that "I happen to have biracial children; they don't self-identify as black or white."
Here's the comment I posted:
Although I could only get my laptop to stream part of this clip, I found the first half of it infuriating, on so many levels. I feel anger as I struggle to find the clarity to express what feels so wrong about several statements in the clip.
My husband and I are white. Our daughter, now 24, is Korean. (We also have a white son by birth.) If our daughter, as the commentator suggested an adult adoptee would, ever uttered the phrase "Oh, thank goodness, someone *saved* me!" I would be appalled, and convinced that I had done something wrong as a parent.
Our daughter's adoption was not a "rescue" of some poor thing in need of being "saved." It was a complicated negotiation to make the best of a tragic human situation by placing an infant whose young mother could not care for her and whose father didn't know she'd been conceived with parents who dreamed of adopting her. The result is a family in which all of us are deeply blessed and enriched by having each other.
But all of us also recognize that our daughter's adoption represents tremendous losses: of the family, culture, language, and country that should have been her birthright. We have all done well at holding onto all we can of her ethnic and cultural heritage (I grew up in South Korea and speak fluent Korean). We have supported her through stages of grieving and exploration. But none of this is the same as being raised Korean by her Korean family. 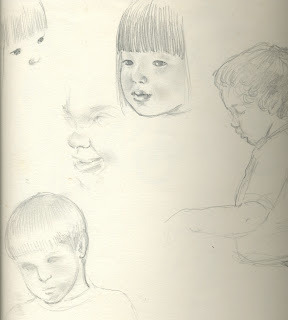 We have understood connection to Korea and education about racism - our own and our daughter's as well as her white brother's - to be as essential to her health and wellbeing as a vaccination or teaching her to brush her teeth. She is simply our *daughter* - not our "Korean daughter" - but we celebrate her Koreanness as we do all of the particular aspects of her singular personhood; to overlook it would be to deny one of the gifts of who she is, a disrespectful diminishment of the complexity of her whole self. It would also represent abdication of one of our chief responsibilities as parents: to equip our children to live and thrive in the larger world - as it is, not as we wish it would be.
The white psychologist's characterization that adoption is "colorblind" and that "race should only examined if you're over 40" is chilling. Imagine what happened every time her biracial children noticed race: their mother, who didn't think it was a necessary topic for children, must have deflected, denied, and suppressed their curiosity, their questions and their confusion. (Given young children's intuitive ability to pick up unspoken cues, the curiosity, questions and confusions may have never even been voiced.) Of course her children don't identify as either white or black - racial identity is formed by the mirrors that people hold up for you when you are young. If their mother's statements are indicative of how she raised them, the mirror in which her children saw themselves reflected rendered their race invisible.
The ignorance represented by this approach is an expression of unconscious white supremacy. (It's also a handy dodge: avoiding the examination of race spares us the discomfort and sometimes real pain of acknowledging white racism and white privilege.) Race invisibility is an aspect of white conditioning; because we are the majority and the dominant group, we see ourselves as the norm, essentially as raceless. One way white supremacy operates is when we assume that what is true for us - the racial "pass" - applies to everyone else as well.
Because this psychologist, as a white woman, has the privilege of ignoring race without cost to herself, she presumes the same for her children, as if her willful obtuseness could give them a cloak of invisibility.
But whiteness with all its power can't erase the race of transracially adopted children. Just because their mother refuses to acknowledge the reality of her children's skin color and racially-defined features doesn't mean society will be so blind. And her children have been given no tools to stand strong in their knowledge of who they truly are, no connection to the black people from whom they were birthed, no claim to that part of their cultural and racial legacy. With no affirmation of the beauty and significance of their blackness and their whiteness, as well as every other aspect of their identities, they will face uninformed and undefended a world that is all too quick to label and diminish them based on race alone.
Posted by Anne Sibley O'Brien at 1:49 PM

Thank you for this post. It's one of the better ones I've seen in response to that CNN interview.