At the invitation of my high school, Seoul Foreign School, I'm in South Korea for 11 days. It's been nine years since I was last here, and once again I'm astonished at the changes in the city that was once familiar to me.
Seoul is more urbanized than ever and I'm struck this time by how international it's become. It's not just the frequent glimpses of Western chains - Starbucks, Pizza Hut, McDonald's - but the predominance of Western influences in trendy coffee houses, cosmetic shops and restaurants - chic, upscale, and sophisticated. 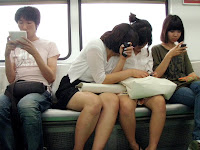 In a clean, brightly-lit subway car, the young passengers are in t-shirts and distressed jeans, ballet slipper flats and athletic shoes, tunic tops over leggings, with white cords of Ipods dangling from ears and fingers busily texting on "hand phones." If not for the all-Korean faces in this crowd, I could be in a U.S. city or in many other urban centers the world over.
Globalization is erasing the particularity of Korea. It makes the sightings of truly Korean details - yellow melons and crisp apples sold off the backs of trucks, street vendor stalls with trays of ricecakes or steaming vats of noodles, walls enclosing tiled-roof homes - all the more precious.

Our children are growing up in a world that is ever more connected. Differences of time, custom and tradition are bypassed with internet hookups and instant messaging. But in a global culture defined by the chatter of media and technology in the common language of commercialization, where is true substance to be found?
Our souls still need the poetry and beauty of ancient, particular ways of living.
Posted by Anne Sibley O'Brien at 6:05 PM