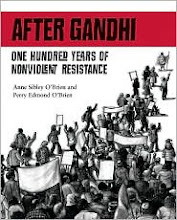 After Gandhi: 100 Years of Nonviolent Resistance, was released in February from Charlesbridge. It profiles fifteen individuals and movements from around the world (including South Africa, Burma, Czechoslovakia, Argentina, and the United States of America) that chose active nonviolence as a strategy for bringing about social change, in the spirit of Gandhi.
The book was co-written with my son, Perry, who served in Afghanistan as an Airborne medic before receiving an honorable discharge as a conscientious objector.
The book has its own website with links for each of the profiles, information on some of the other figures and movements we couldn't fit into the book, and a series of short essays on what we learned from our research, "Living Nonviolent Resistance." We'll be updating the site regularly as we learn of new examples of contemporary nonviolent resistance.
In addition, Charlesbridge has assembled a website with resources for educators, including a trailer for the book, a discussion and activity guide, and downloadable posters with portraits and quotations.
Posted by Anne Sibley O'Brien at 7:09 PM

This sounds like a wonderful book. Congratulations on putting it together and with your son, no less.

I've heard you are coming to our school- SFS- in Korea. I hope I will get a chance to meet you!

Hi, Christina!
Yes, I'll be visiting SFS the week of June 8-12. I'm so excited about the trip. I haven't been back in Korea since 2000. My daughter Yunhee, age 23, will be accompanying me.

Look forward to seeing you then.

So good to meet you at MECAF, Anne! I'm excited to learn of this beautiful book of yours, too.